The Mixed review is a record of my daily(nightly) readings. I hope it provides a resource for your own projects and projections into the intricacies of our world.


The 1st Item of the Night Is: # GUEST WRITERS ESSAYS 25 /// Fibrous Assemblages and Behavioral Composites by Roland Snooks (hosted by The Funambulist) 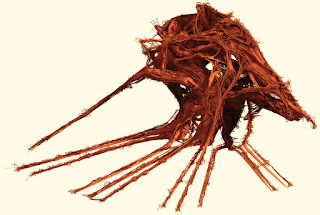 This article by Roland Snooks, a senior researcher at Kokkugia(I think it’s an architectural firm), out-lines the aims of his architectural research. Its outline embodies it's message of non-linearity by waving a fibers of; nonhierarchical, ecological interaction, micro-level integration of structure & ornament, and non-discrete geometry, into what the writer calls behavioral methodologies. Sound confusing? Basically, what he is saying is that by developing building materials and tools that don't limit the final structure of a building, architects will be able to design buildings that are more conducive for a multi purpose living space. He also explains how these "behavioral methodologies" integrate form and function into an ornamental experience.


One thing I notest in this artical is that it's carictersation of non-linarer form as something carictoristicly non post-modern, this reminded me of  Manuel DeLanda new-realist philosophy, and shore enough I found that Roland Snooks and Manuel Delanda are both part of NSO(The Nonlinear Systems Organization at PennDesign) and this explains the common nomenclature.

The 2ed Item of the night is: MANUEL DELANDA: Emergence. 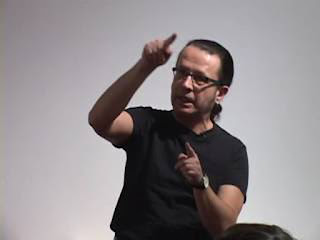 Manuel Delanda explains the concept of emergent complexity through the example of the components of water. Hydrogen and oxygen two thing apart have properties distinct from both of them when they are combined, these new properties are the properties of water. Those two entities cabin to make one new entity. Manuel Delanda goes on to give a brief history of emergence, and then to give a more nuanced analyses of the emergent properties of a knife. This analysis gets fairly in depth for such a short essay; actually it’s the intro to his book Philosophy and Simulation: The Emergence of Synthetic Reason which the host of the site, LEBBEUS WOODS, states at the beginning of the page.

The 3ed Item of the night is: Arrests as Occupy slams mortgage bankers in San Francisco (PHOTOS, VIDEO)

"Demonstrators sought to vent rage over foreclosures and executive compensation, and called on Wells Fargo CEO John Stumpf to resign. Stumpf is reported to have received $19.8 million in compensation last year, despite the fact that Wells Fargo has been the recipient of dozens of billions of dollars in taxpayer bailouts since many of its bets went south in the 2008 financial crisis."

The 4th Item of the night is: portland show listings.

And And And - You Can't Hide

The Last Item of the Night is: Anasept from Guy Debord 1967 Society of the Spectacle. 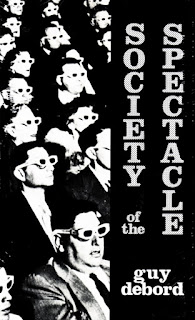 1. In societies where modern conditions of production prevail, all of life presents itself as an immense accumulation of spectacles. Everything that was directly lived has moved away into a representation.


Thank You And Have A Good Morning!!
Posted by dustygravel at 6:01 AM