This is my retelling of the legend of the bridge of the god's, Native American meta-story shared by the Klickitats and other tribes of the Willamette river valley where I've lived most of my life. I hope that you enjoy it and it inspires you to seek a deeper understanding of the place where you live and the people who have occupied it. The themes contained in the bridge of the gods includes jealousy, love, group affiliation, war, change, and the nature of knowledge, but the theme that I highlight the most is the theme of devotion, as it applies to our understanding of ourselves, our environment, and reality itself. I include a version of the original in the links so that you begin exploration into this deeply profaned native story. 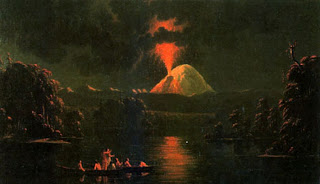 There is a man made of radiation who lives in the sun. When he leaves home everyone calls him sunshine. Most every one loves him because he brings life and joy to them. But as time passed a vicious quarrel rose up between two brothers. They were so angry with each other that they couldn’t get far enough away from each other. Further more a strange vision began to fill their eyes, each of them began to see the whole of existence as belonging to themselves. Naturally this put them at bitter odds with each other. One night the older brother dreamt he was a frigid storm; he went down into the younger brothers nostrils and turned him into solid ice and shattered him into a million pieces. So Sun Shine took the two brothers up into the clouds and said look here at the pacific northwest, do you see how vast and beautiful it is? Certainly there is enough space for both of you there but if you can’t live in harmony I will split this land up and give each of you half. So each of you will shoot an arrow in the opposite direction and where your arrow falls that will be your land. I will set a river down that will separate your two lands. That river is called the Columbia today.

The older brother shot his arrow into the Willamette valley and became the father of the Multnomah people. The younger brother shot his arrow north to the Klickitat and be became the father of the Klickitat people. This action had some residual impact because each brother and their families started to see all of reality as two different sights, north and south belonging to a different brother. Then Sun Shine built an earthen bridge over the columbia and gave it to the two brothers to share. He named it the bridge of the gods because the two brothers exuded so much power over their surroundings. He hoped they would travel across it and come to realize that they actually needed each other, and for a long time that was just what happened and each was grateful for the help they received. Over time their respective numbers grew and many multitudes were crossing on a regular bases, and this was healthy for all that existed. But gradually they became ill-content with what they possessed and began to covet and steal what the other had.

So Sun Shine buried his face in his hands and wept and the sky went dark and it rained. And the rain was cold and relentlessly pelted the people on the top of their heads, noses and ears. The people began to think they would never see Sun Shine again. The people feared that they would freeze to death so they set out to find some warmth and they found it. At the center of the bridge of the gods lived a very old women who nurtured a fire at all times. They begged her to share it with them and she happily complied without asking anything in return. Sun shine lifted his face from his hands and smiled.

The people came from miles around carrying torches they would light with the womens fire to take back to their homes and children to cook meals and warm their faces. The flames shimmered over the colvalt blue hue of the early morning sky as people walked home.

Sun Shine came to the old women and said ‘Loo-wit’ which means fire on high, “I’m so impressed with you I want you to have what you want.” She said, “as I get older I have realized that life is short and beauty is fleeting, if only this wasn’t true.”

Sun Shine said, “Look Loo-wit this isn’t true for you,” and she became young and beautiful immediately. “Keep your fire burning for it is good.”

Peace and joy was in the land. Young men would gather at the bridge and Loo-wit would explain to them how to live in harmony together. They would marvel at her vast understanding and they gazed into her eyes and their eyes were changed because her eyes saw them and cared for them. The two brothers in particular were deeply moved by her great wisdom and kindness. In spite of her great wisdom Loo-wit could not decide which man she loved more. The brothers grew jealous and burned with animosity towards each other. The younger of the two snuck into the lodge of the older while he was asleep and gouged out his eyes so that he couldn’t see the beauty of Loo-wit anymore. This did not stop the older brother, he was such a great warrior, now blind, he went and killed a thousand of the younger brothers people.

Sun Shine was very frustrated by this time so he want to Loo-wit’s house on the bridge of the gods and said, “Loo-wit, your friends, those two brothers that admire you so much they will kill each other if you don’t pick one of them.” She said, “they will kill each other if I do pick one of them.” So Sun Shine said, “you are so wise, you know that is probably true but if you can’t choose one of them then you are going to have to tell them that you don’t love them.” Hearing this Loo-wit started to tremble and weep. “I can’t”, she said,” I can’t lie and I can’t make a decision–what can I do?”

So Sun Shine said, “I could turn you into a mountain because mountains don’t worry about love.” Loo-wit smiled with a glimer of hope. “Please do”, she said. Then Sun Shine turned her into a mountain and today people call her Mount Saint Helens.

When the brothers heard that Sunshine had turned her into a mountain they were greatly disturbed and crawled on the ground in anguish screaming at the sky. Sunshine heard them and came down and sat with them on the ground. They both asked Sun Shine how he could take from them what they most loved. Sun Shine said to them, “Which of you would became a mountain yourself to be with Loo-wit?” And at once they both proclaimed that this indeed was their deepest desire. So Sunshine turned them each into mountians. The older brother is known today as Mt. Adams and the younger brother is known as Mt. Hood. Upon seeing her close friends turned to stone for her sake Lo-Wit trembled with deep and great anxiety. She realized that the conflict that was theirs had became her own and that what was divided between her was now divided within her. Now the pressure builds within her and explodes from time to time usually killing thousands of beings in a wake of sorrow and destruction. 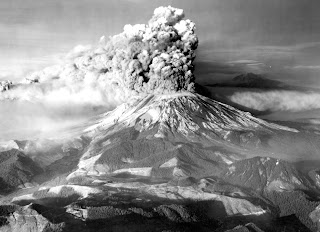 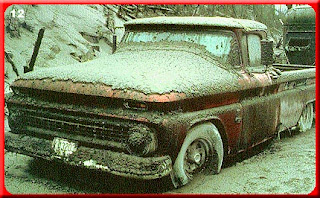 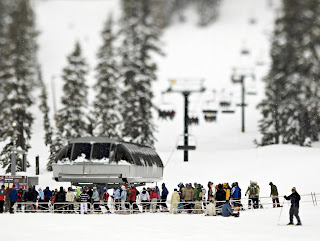 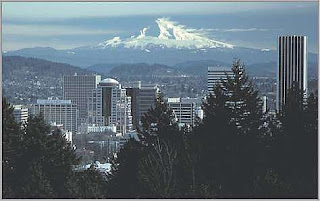 Posted by dustygravel at 6:26 AM