Gilles Deleuze in the Mirror of Nature

My genes come from Finland. I don't really know what that means for my identity. This or that identity is often invisible to the one that embodies it. I see people from other places with their unfamiliar ways and find my self floored, filled with wonder, and jealousy for that something spatial which they possess, whatever it may be; an accent, a sense of poise, a style of thinking, a sentiment, I notices these things are distributed differently in different peoples, and I delite in it. It's so clear to me people carry their terrains with them. Gilles Deleuze wrote a lot about something he called deterritorialization, which is for him the way that travel, (in addition to changing the traveler), also changes the places where the pilgrim arrives. This is because we like any plant or animal or rock formation or cityscape are ourselves environments and part and parcel of the environment. We are environments and when we move we move oneterrain to another--and we put its sentiments into a new context. When I meet someone with a strong connection to their place of origin I find myself deeply attracted to them, (not necessarily in a sexual way) maybe they’re from Tokyo or the Caribbean, Tel Aviv or Bagdad, Ireland or France, the British Isles or the Northern Lights, when I talk to people from other places I feel a new possibility, another land is landing on my shore.We must remember though that it is often a terrorizing thing to have another land port on your shore unexpectedly. There is pain when boundaries are crossed. We must respect eachother. We have to learn from each other our unique modes of patience. Each others sense of signicher and style.


Let’s not forget the first nations of the western world and the trail of tears. It’s my firmly held belief that it is not possible for new comers to ever reach the depths of those that have been here all along. I can’t really explain it, but deep inside me I feel that first nations people have a deep authorship in regards to land, I don’t really know what that means exsactly, it certainly isn’t something we can see with so-called "natural eye’s," on the face of it foreign guns continue to fortify the land and extract its inky life blood like a mosquito, but I feel it, there are mysteries in the land, mysteries that take literally... that take millennia to learn. And this knowledge is a kind of authority that is almost intangible, but powerful even when its being suppressed. There is a common cliché among certain circles that any kind of affiliation, especially if it isn’t passive politically is a form of fetishism, or worse racism. I don’t know... have you encountered such attitudes? I myself find this very unnatural. I once asked my friend Bernard Untalan, (who is Guamanian/Mexican) what he thought about xenophobia, after a pause of timehe replied from a perspective I hadn’t heard before, (so wisely) “most people like to travel.Why?... It’s to connect with a different experience; there must be something in the human soul that longs for that kind of experience." A longing that is not afraid of the other.I think my friend identified a very subtle will to diversity and perhaps an even more subtle form of unity, umong the tribes of the world, in the ordinary desire for travel. No doubt this issue of land and ethnicity is complicated and is even a painful issue for millions of people around the world, but more and more I’m seeing with more natural eyes the importance of these factors; of land, traval, and ethnicity. Slowly a new picture is emerging. I for one don’t want to shy away, and go back into the bourgeois mass cult of popular culture, with its white washing and its ironing down, but neither would I hand the whole thing over to those that seek to cryogenically freeze culture in place forever and neither does the hyper critical identity policing alternative, seem all that appealing. Lets start again... one more time. I think it’s time to make new connections­--new more rooted and connected rhizomic identities for ourselves. We could make deeper connections with the places we live in, with the places we carry with us (across the ages), and perhaps more importantly with those that have been here or there longer then us, (there is always someone who has been here or there longer). I think this would actually make something new for all of us. Something we can’t yet imagine. It’s important to remember that culture is alive, it is and has always been a changing thing.

It's these encounters with deterritorialization that has finally inspirited me to dig into my own ground, (place of origin), and see what I can unearth and bring to bare on our experence. Because I don't have the means to actually travel, instead I scour the internet through a kind virtual tourism. Along the way I happen upon this very nice collection of Finnish nature paintings, A Mirror of Nature, and I form a link with it. The thing I want ya'll to notice about this collection, beyond the paintings themselves, is the writing, exquisite writing on this site.

I don't know who wrote the descriptions to these paintings but truly, the writing on, A Mirror of Nature, does more than just give us a historical back drop for its paintings, it articulates the affections of the paint and its nature as it moves these beautiful Finnish landscapes through time and space, across the globe, and into our eyes. It makes of the beautiful (historical) Finnish terrain a new conception of ur-place of origin. It shows that writing is importent to painting.

In a sense our place of origin is each other, because we are remade each moment, but we are made of what we bring to each other.

A Mirror of Nature.


An Excerpt from A Mirror of Nature 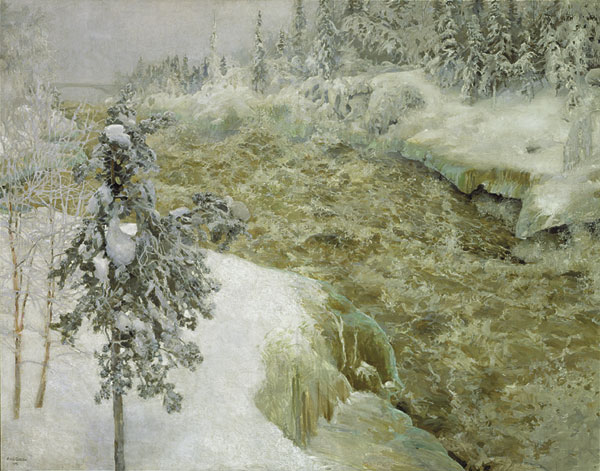 The Imatra rapids were Finland's best-known tourist attraction in the 19th century. Russians in particular came in droves from St Petersburg to wonder at the untamed force of the waters. The rapids had already been harnessed for generating electricity at the time, and the power company invited Gallen-Kallela, Albert Edelfelt and Louis Sparre to photograph, draw and paint the rapids in the coldest month of the year, when the contrast between the freely flowing water and the frozen natural environment around it would be greatest. Gallen-Kallela created several images for publicity purposes. The large Imatra in Winter is full of drama and Romantic admiration for natural forces. The encounter of frost and thaw creates a rippling in the air that is conveyed skilfully and naturally, and there is a wealth of detail. The bridge spanning the rapids in the background is an almost inconspicuous reminder of how, here too, Man has tamed nature.

Posted by dustygravel at 6:43 AM