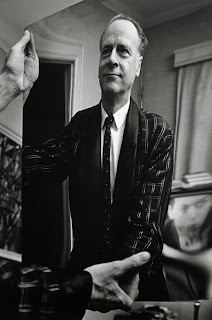 A reflection on Marshall McLuhan.


Eleven years ago I watched a documentary on the IFC broadcasting network that absolutely blew my mind.

The documentary was McLuhan's Wake: The Descent into the Maelstrom, and Marshall McLuhan instantly became an intellectual curiosity for me. I remember carrying around an old dog eared copy of the Understanding Media, and feeling like the world I lived in was every bit the science fiction utopia we had long been promised, that is that the technology that surrounds daily life were returned to their original splendor, as relics of the future. I remember reading passages like, "The instance of the electric light may prove illuminating in this connection. The electric light is pure information." And not knowing at all what it meant, but feeling like it was some kind of sacred knowledge that if I could understand would open up new worlds for me. I thought, what a wonderful couple of sentences! The bulb flickered in my head, I was encountering a whole new world of ideas. But I didn't understand them, it took years for me to begin to understand them, but I enjoyed them. The effect of watching an interview with McLuhan or reading his work is similar to watching a vintage sci-fi movie, all this weird jargon flying at you at a million miles per second, and soon realizing that each word is drenched with meaning, that the crew understands the orders. It's a fun experience when you really get into it.

"Instead, it is more feasible to "present" TV as a
comples Gestalt of data gathered almost at random."

McLuhan really is alien when being interviewed, the interviewer will ask him a seemingly strait foreword question like... well... I'm thinking of one lady, (not really an interviewer exactly) from a live studio audience asked him, (so smartly), "I would like to ask him(McLuhan) if he would agree with that nuclear energy represents; mass suicide, the ultimate expression of the death wish, or more in line with his terminology the last ditch fight to the death of the left hemisphere world of the military industrial complex(...)I'm curious to know how he expects they are going to lose."(check out 7:39) McLuhan responded in characteristic "coded" fashion, "...But the...hu...main development in these electric media is the loss of privet identity, mass man means man as related to all other men simultaneously, so that the nuclear world is a kind of rip off as far as privet identity and privet values and goals are concerned(...) and ha...just how that relates to the atom bomb, and so on, would take a little while to develop." He went on to say that the patterns can be discerned. McLuhan wasn't trying to evade the question here. Basically he's revealing his method. McLuhan studied mid-evil literature in grad school, part of his approach to analyses is to examine the roots of the words that make up a concept, this is a very old method, but McLuhan applies it to modern technology. It's kind of like he answered, personal creativity is being hijacked for the ends of mass destruction, and, well…I don’t know…we could go on a million tangents. The point is that, part of what makes McLuhan so awesome is that he can deal with real world social problems as if he's a technician of the Starship Enterprise. In his chapter on radio in Understanding media he said that if TV where invented before 1933 Hitler would have never come to power and WWII would have never happened, because he would have been shown for the raving lunatic he was. If it seems like McLuhan didn't care about nuclear threat, this wasn't the case, Marshall McLuhan’s stated scholarly interest was to prepare people for the extreme effects of technology. It's just that the level of awareness that this requires is far deeper then saying the left hemisphere of the brain is going to destroy the world. McLuhan seeks to understand how technology works in a larger context. Some times his context is so far out that it seems like he's missed the whole point, but bar with him he eventually ties it all together. McLuhan is cool because he is an alien. He's here to help us.
One way to understand a thinker like Marshall McLuhan is to take some of his concepts and explain them until they start to connect into a larger vision. McLuhan's most fames concept is, the medium is the message, some of his other concepts include, the global village, hot and cool media, Affect (something that was later pick up by Gilles Deleuze), and figure and a ground, put all together these concepts make up a vision of the world in which technology comes alive and begins to take an active and not just a passive role in our lives.
In this sense McLuhan wasn't only a mystic but also an existentialist, the media is the message, means the same as "existence precedes essence," but as applied to a thing (in-itself) and not just a people(for-itself). People always used to ask McLuhan, "The medium is the message; does that mean the content isn't important, to what is be conveyed?" To this McLuhan would usually say that each media will tend toward a different content, but that's not the thing to focus on, it's what these things do to us, that we should analyze. This begins to explain why he sounded so alien, it's because he wasn't looking at these things like a person would, he was looking at it the why we might look at an ant hill, or a bee hive, he was looking at things from a distance. This is way when people would ask him about his perspective he would say he had none, he would say he was being objective. In a sense he must have known the difficulties of a claim to objectivity in this regard, but he had a point in insisting on it. The point as McLuhan would say is not to get hung up. He was engaged in observation, just like a biologist. He certainly would have been familiar with the primacy of subjectivity in the work of "other existentialist" like Jean-Paul Sartre, he made reference to them quite often. He just wants to stress a sense of dis-interestedness in observation.

One of his main concepts, Figure/ground, was lifted from the work of Gestalt Therapist like Fritz and Laura Perls. For McLuhan the way to understand the essence of a medium is to analyze the effects it has on the wider environment. Perhaps this confused a lot of people because we're used to hearing about the environment in a different way. We usually use it to refer to plants and animals, but when McLuhan uses it he means something more basic, he means our surroundings, but what he wants to avoid is to think of the ground or environment as a back drop of a play. He says, "all the world is a sage" instead of a stage. McLuhan understands a figure through its ground, and a medium through its affects, that’s part of what he means by, the medium is the message. You don't understand a medium like TV or a car until you analyze its effect on its surroundings or environment, the first generation to grow up after the advent of TV was less eager, (like a paper boy might be) more laid back, more gestural, less emphatic, you know that greaser thing. When the car was first invented "city slickers" would take it out for a country drive, later under the influence of TV They decided they could just move away altogether.

So what's the big deal? Why should we care if the medium is the message, or the message is the message, or a medium is just something to hold something else? Isn't it in a way obvious that the experience of listening to the radio is different from watching TV, even if it were the same program being broadcast? Well yeah, that’s great if that is obvious, but what fallows from this observation might not be so obvious. The implication is that the things we use have a kind of power aside from what we bring to them. This is a radically different kind of perspective from the one that see's matter as inert, or dead. McLuhan’s view of the world is one in which the things of this world have a life of their own. McLuhan is in a very real sense a modern animist. Animism is a world view in which physical entities—including animals, plants, and inanimate objects possess spiritual power.
As a modern animist McLuhan can help us understand a world view that humans have held for the vast majority of our existence on this planet. In a way though, according to McLuhan’s own philosophy he doesn’t really need to teach us this, because the technology will eventually teach us this, any way. Each technology teaches us about the environment it creates. What McLuhan is really trying to teach us is how to stay vigilant, so that these new technological circumstances don’t catch us off guard. In a sense McLuhan’s project is similar to the psychologist Carl Jung who analyses myths and dreams in order to uncover the subconscious forces that disrupts modern life. This new world, ever more animated by things then ever, is part of what McLuhan means by the global village. It's often been pointed out that technology will bring us together, but what a lot of people miss about the Global Village is that it’s a place where inanimate things become animated, where the tools of man become caricatures in a vast cosmic drama, a new epoch where the world once again becomes enchanted by Angles and Demons, messages and mediums.

A prominent student of Carl Jung, Joseph Campbell, was once asked if there were a mythic tail that could illuminate the struggles of our own time, to which Campbell replied, technological development is moving too fast for such a story to be told just yet, it would be out of date before it could shine its light on our ever changing social environment--(or something to that effect), maybe though we do have such a myth, one that stands high enough to illuminate the hidden mysteries of our ever changing times. Many have referred to McLuhan as a prophet, for his anticipation of the decline of traditional forms of literacy and the increases of globalized connectedness, maybe the secret of his prophetic power lies in his discovery of this new kind of story. Perhaps The Extensions of Man is the myth of our time. The Cosmic story that shines a light on our on going struggle with Being.


Understanding Media: The Extensions of Man, By Marshal McLuhan.


Daniel Coffeen’s teachings on the work of Marshal McLuhan.

Posted by dustygravel at 6:43 AM