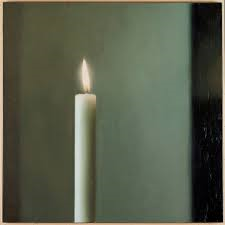 Gerhard Richter: Kerze (Candle), 1982 © Collection Frieder Burda
Candle is also the cover of Sonic Youths brilliant album
Day Dream Nation.
Gram Harman, a contemporary philosopher that you should know about, says each object has its own essence apart from the some total of interactions it can come into with other objects or people. Harman says interactions reveal something that was already there, it wasn't always there because Harman doesn't believe that 'forms' are eternal like Plato did, its just been there for as long as the object has existed. I considered the nature of the candle in light of Harman's claim.
Candle light will never be replaced by the light bulb nor was it ever merely a utilitarian object, lacking it's current magical quality. There has always been something both terrifying and soothing in the light of a candle. It is no wonder that Rene Descartes discovers the essence of thought & being while playing with candle wax. Or maybe it be better to say that, it is the vary essence of wonder that he did so.
Posted by dustygravel at 5:38 AM