I was never a huge fan of Mount Eerie, until I saw them at Mississippi Studios back in April. I did have a certain admiration for certain qualities in the music, it's sweetness, the sense of distance, and warmth, but for some reason it never it never really made a home in me. My friends would rail about it, but I wouldn't understand, "I kind of get it, there's these qualities... but there's no sum totally. No incommensurable reckoning." All this changed for me on April 11 2013. My friend Jenny invited me to the show, but it wasn't just us, she had a date too. So I was a 3ed wheel, ah what ever. He kind of disappeared at one point and was gone for about 45 minuets, when he finely appeared I could see that he and Jenny where reading each others minds; he was apologetic, and she was like well you're making decisions, and then he left again. It wasn't like he just didn't give a shit, Jenny lived in Mexico city for awhile last winter, and this guy went all the way there from Portland OR just to see her. There was something deeper happening between them, these were moments of reckoning. I just stood and watched. As waves of heavy meditative sound crashed over me, entirely crushing me with its power. One of the songs ended like one of those anime blasts that cleans out human civilization forever, pals after pals of subsonic electric blast. Deep inside of this apocalyptic vision I saw the sweet lyrical prayers of youth, that I had only barely sensed in the earlier transubstantiations. There he was the sweet meditating monk of Mount Eerie, weathering the storm. I was reminded of the last time I was in California, standing in the ocean, waiting in the water to feel the pure force of nature knock me clear off my feet. I would roll in the water and just know the power of God in my body. I knew then that God is in the storm, if only you can hear him in the whisper. Eternity cleans every thing, and eternity lasts forever. It's hard to hear this music on these tinny computer speakers, you must use your soul to hear what is no longer there.

I was glad that Jenny was there to hear this music with me, like witnessing it with a friend some how made it more real. 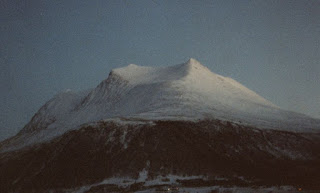 Posted by dustygravel at 6:31 AM