Who is the real occupy Wall Street? Max Keiser talks about; wage slashing, off shore banker fraud, money counterfeiting, forced lowering of interest rates, 2% of counterfeiting unaccountability, fractional reserve, the IMF, and AUSTARITY, this is a true occupation of wall street. With one simple demand, NO MORE PONSY SCAME ECONOMY!


It is clear, the verdict is in, and Wall Street is responsible for the Global Economic crises. How? The inverted pyramid archetype and all its earthly forms, the use of minimal collateral to leverage as much credit as possible: the backing of all the lawns with only a fraction of their value in deposits, instituting of the FDIC as a tax funded insurance base for fraudulent banking processes, credit default swaps, and cooking books with “phantom wealth." In this interview Via Broadband says, "I think we can talk about austerity as a kind of a fraudulent concept." why? "We’re tightening our belts to pay somebody else’s debt." So there you have it, the occupy wall street movement might be history  at this point,(for all I know) but the truth will never die, Wall Street Banks are responsible for the economic bubble and its subsequent explosion!

The 2ed ITEM OF THE NIGHT IS: An esserpt from d.a.levy's SUBURBAN MONASTERY DEATH POEM, & a video of the people protesting bank of America.

What follows is not my own writing, but a poem by D.A.Levy. 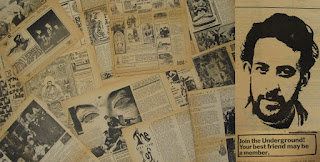 i cld try to tell you
about the hopeless despair
ingrained in ghetto walls
& police brutality or police stupidity
or police reality is more than just words
to define situation
by students looking for a cause.
the situations exist & continue
quietly in the dark while the
protest goes on in daylight -
both unheard.
Really
the police try to protect
the banks - and everything else
is secondary
during the riots
i watched the news
& didnt pick sides for a change
i just sat wondering about all
the living room revolutionaries
safe in the suburbs
who cheered everytime someone
was shot or a building went up
in smoke
ten blocks away
it was real
thousands of tourists
arrived


The expressed purpose of Modern Money Mechanics is to explain how money is created through the "fractional reserve system." The booklet was produced by the Federal Reserve Bank of Chicago, so being produced by the bankers, themselves- it is a great revelation of the inherent corruption in the money production machine. It is my hope that through the reading of this fine text you will be able to wield the words of power agents its self. This is how the idea works: you pick a passage from the text,


"Money's real value can be measured only in terms of what it will buy. Therefore, its value varies inversely with the general level of prices. Assuming a constant rate of use, if the volume of money grows more rapidly than the rate at which the output of real goods and


services increases, prices will rise,"(p.2 MMM) then you take than you fallow the statement to its logical conclusion- like this- so the fact that the average car coasted about $640 in 1930 and is now somewhere around $28,400, is by your own admission due to the fact that you continue to print more money than we need? See. As a side note in case you don't think inflation matters because wages also go up then think again, inflation affects your savings regardless if your income increases, and sense the 70s the average income has not increased or even keep pace with inflation (for more on this check out Richard Wollf's Capitalism hits the fan).

The point is that when The Federal Bank of Chicago prints a publication that’s state that they control the printing of money in order to limit inflation, while outside their office windows, in the real world, inflation is going wild in the streets, this can be safely considered an admission of guilt. So you see, by carefully reading documents like Modern Money mechanics, and using their words to open the political discourse, we can gain more democratic power. I would like to see this done all kinds of legal and policy documents like, the financial services modernisation act, citizen united v federal election commission, CISPA, ect. In this way we will all begin to engage "our" democracy more directly.

If you have trouble understanding the Modern Money Mechanics document, then here’s a helpful YouTube.


THE 4th ITEM OF THE NIGHT IS: The Monetary Reform Act.

So hopefully by now it's clear to you that Wall Street is to blame for credit bubbles and the economic catastrophes that follow, but you might be wondering what we can do about it. Well, there is two options that I know of, the first is the Monetary Reform Act, and Dennis Kucinich the [NEED] act, both of which call for an end to the Fed and it's the ever inflationary fractional reserve system. I encourage you to read both of them and then contact your congressmen & congresswoman, and


Express your support for both or either one of them. One thing is for shore perpetual monetary inflation is not sustainable, and something must be done about it.